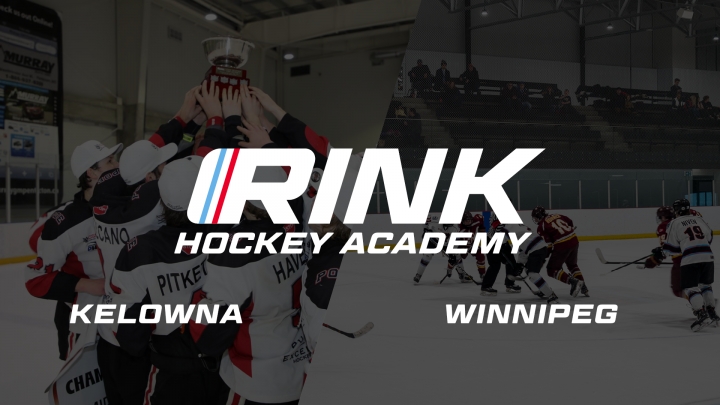 The RINK Training Centre, based in Winnipeg, MB has been focused on growth and skill development of players and goalies from introductory hockey all the way to the NHL for the past 12 years. The RINK Hockey Academy (RHA) has been a proud member of the CSSHL for the last 5 years and has grown from two to four teams as well as adding their first female team this past season. The RINK Hockey Academy is focused on education-based hockey and developing young men and women not only to become exceptional student athletes but outstanding citizens within their communities. Being a Hockey Canada Accredited School, student athletes have access to all the support and resources they need to succeed in the classroom.

“Providing a world-class experience for these student athletes is objective number one,” said RINK President, Ryan Cyr. “As a program, we strive to provide opportunities both on and off the ice as well as allowing student athletes to excel personally and professionally.”

The RINK Hockey Academy has seen tremendous success in providing a fully integrated experience with academics, travel, skill development, games, and off-ice training and looks to bring their experience and operational expertise to only further the success of POE/EOE. Going forward, The RINK Hockey Corp. will maintain current operations of POE/EOE, while maximizing the development of student athletes through education-based hockey. President and CEO of POE/EOE, David Roy, will remain a part of the organization and will be vital to a successful transition into expanding the RINK Hockey Academy.

“We are incredibly excited to add POE Kelowna into our RINK Hockey Academy family. We are looking to implement positive change to maximize constructive, progressive outcomes for all parties involved.” said RINK CEO, Brad Rice. “David has done a tremendous job creating a strong program and foundation for student athletes here in Kelowna and we can’t wait to see what the future holds.”

ABOUT PURSUIT OF EXCELLENCE HOCKEY ACADEMY

Hockey players (age 12-17) from around the world come to Kelowna, British Columbia, Canada each September to spend 10 months participating in an unprecedented 1000 hours of hockey development training. The Academy achieves incredible results with players because it has the right blend of hockey development and game experience.

President and CEO of Pursuit of Excellence and Edge of Excellence, David Roy, had the following to say about the acquisition, joining the RINK Hockey Academy, and what the future holds.

“When I started POE 17 years ago, the whole purpose was to create a program for developing a 360-degree player. Our goal for student athletes is to maximize their potential by combining their excellence as a hockey player, student, and as a person. With the RINK’s acquisition of POE, we are now able to tap into their outstanding skill development programs and facilities, both in Winnipeg and now in Kelowna. This will provide young hockey players with an opportunity to develop as 360-degree players beyond what I could have ever imagined. For me personally, joining such a great organization in Winnipeg, is like coming home. Having operated the Edge of Excellence Skating Camps in Winnipeg since back in the early 90s, I am very familiar with the city and the people. This merger will allow me to be freed up from the business side of the organization so that I can get back with players more on and off the ice which is where my lifelong passion continues to be.”

ABOUT THE RINK HOCKEY CORP.