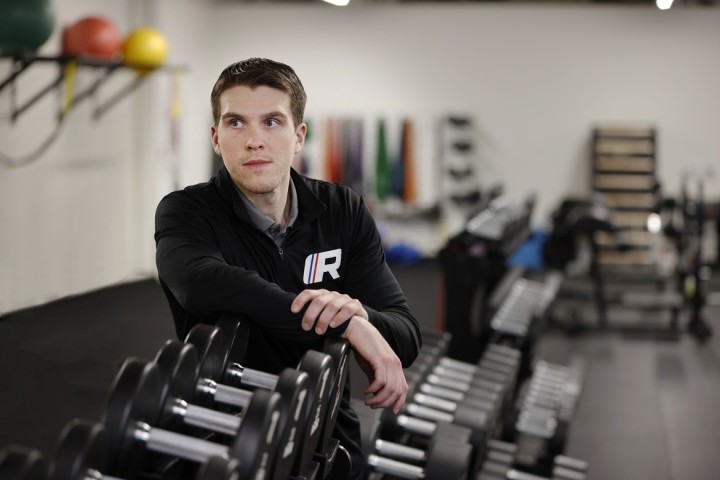 Jon Carlson, the 27-year-old assistant coach of the RINK’s U16 Prep team, took a long, scholarly way to the coaching ranks.

Though it might be a tad different than some of the other coaches on the diverse RINK staff, his perspective has certainly helped the program.

“With Jon finishing his playing days in college, he gives the team another perspective from a different style of game,” said U16 Prep Coach Jeff Borse. “With more information on the college side, he is huge when it comes to answering questions the players may have.

“He also connects really well with the team, being younger and having recently played, the boys look up to him and respect him. His knowledge for the game and how he can articulate to the boys is an asset as sometimes I may over-complicate the explanation. He can help the players break down what we want.

Originally from Northwestern Ontario, Carlson grew up playing all his minor hockey in Fort Frances. At 16, he moved to Thunder Bay and played for the AAA Kings. After a few seasons with the Kings he moved to Manitoba and played a couple of years in the Manitoba Junior Hockey League for Winkler and Portage and then went east to Fredonia State. He played NCAA Division III hockey in Buffalo for four years.

“I got my undergraduate degree in and that was both fun and rewarding,” he said. “It was a great time and I got to play four more years of hockey.

When I graduated from Fredonia, I pursued my Masters at the University of Cincinnati and ultimately succeeded in December of 2020.”

Still, in Cincinnati, Ohio, he was a long way from Winnipeg.

“I played junior hockey with Kayden Jarvis (the brother of Carolina Hurricanes rookie Seth Jarvis) and he was one of the skills coaches for the U15s,” Carlson explained. “He sent me a message one day and asked me what I was up to. I told him I was just finishing school and he said, ‘The U16s are looking for an assistant coach if that’s something you’re interested in?’ So, I jumped at the opportunity and I’ve been here ever since.

“It’s been phenomenal. It’s been a great experience. The staff, along with the company as a whole is very professional in everything they do. Everyone here is super friendly and helpful so it’s been a really great experience for me in my first year. I’ve loved coaching the kids. I’ve loved working with them collectively as a group, along with building relationships individually with them, it’s been really rewarding for me.

“It’s been a good transition for me, going from being a player to the other side of the table, I get to share my knowledge and passion for the game from a different viewpoint so I’ve loved being involved with the U16s. It’s a great group of kids.”

“I think a massive reason Jon plays such a large role in the players development, is that he cares about them,” said the head coach. He wants to see them get better and perform well. With that passion, he gets involved with drills applying pressure, and pushing their pace and decision making. I think it makes a huge difference to have a coach involved in drills and not just preaching from afar.