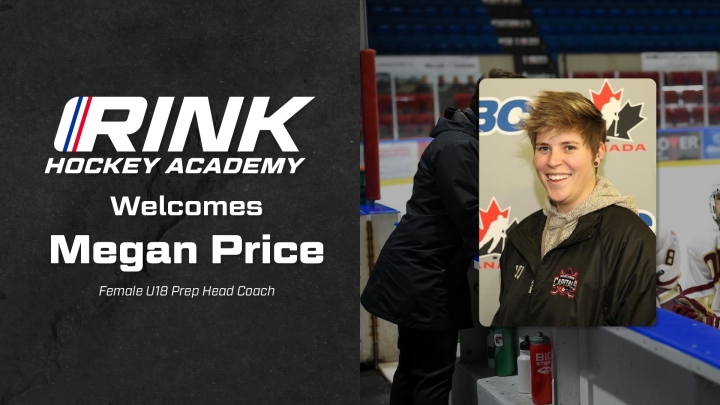 Megan brings an extensive coaching resume to the table with over 10 years’ experience coaching elite athletes in BC, Alberta, and Ontario. She has a number of year experience as well working within the Canadian Sport School Hockey League (CSSHL) and most recently was the Head Coach for the Ontario Hockey Academy U18 Female Prep team. Being a former NCAA Div. 1 and USport Canada West athletes, she understands what it takes to be successful to continue progressing within the game and beyond. Quoted as being a “student of the game” and continuous looking to challenge herself has had its benefits. Megan also possesses a master’s degree in coaching studies from the University of Victoria.

“I am thrilled to be named the Head Coach of a competitive program and given the opportunity to combine my passion for the sport with such an amazing organization. I am looking forward to collaborating with the staff team in growing the female side of the RINK program and I am honored to be able to provide support for the athletes in their pursuit for excellence,” said Megan about her excitement in joining the RINK Hockey Academy.

As expected with such a highly educated and experienced coach like Megan, she also has an excellent philosophy around coaching and athlete development. She is athlete-centered when it comes to development and looks to create champions both on and off the ice. The core values Megan aims to deliver are centered around creating a positive environment for athletes to compete, fostering respect, value, discipline, accountability, and gratitude within the team culture.

“I am excited to be heading into the season where we will be permitted to travel and compete with a full schedule. I have a positive outlook on the season ahead and am excited for the challenges that will come with it. As a competitive person, I am really looking forward to seeing where we rank amongst the top programs in Canada and believe we will be a top contender in the CSSHL,” said head coach Megan Price about what she hopes to accomplish with this year's team.

When asked about the season ahead Megan responded with, "My goals are to build confident and competitive young women who not only compete on the ice but who are also successful in life beyond sport. My hockey experience has taught me that it is much more than just a sport, it is a platform in the development of people and relationships, and I hope to make an impact and facilitate in developing life-long relationships.”

President of RINK, Ryan Cyr, had the following to say about the recent hiring. “After an extensive interview process with multiple candidates, we are extremely excited to have Megan Joining our team. Megan beliefs and philosophy of the game are right in line with the RINK. Her passion for the sport and the development of student athletes is second to none and we are excited to have her lead RHA Winnipeg’s Female prep team.”

RINK Hockey Academy Winnipeg is constantly striving towards creating an environment conducive to success in female hockey and beyond. The aim is to be one of the top academies for preparing and moving on female hockey players to the next level, namely being NCAA & USport programs. To aid in this process, Megan will be working alongside Dwayne Gylywoychuk who leads our coach mentorship program. Dwayne brings decades of experience including coaching the Canadian Women’s National Team at the Pyeong-Chang Olympic Winter Games in 2018 as well as a strong network of relationships and resources, all which Megan will have access to.

“Megan’s passion for the game of hockey and keen perspective on development of female hockey players, not only on ice but as people as well, is a quality that will fit in well with our RINK family. Her background in the game of hockey, not only as a player, but also as a coach, speaks for itself. I am extremely excited for the opportunity to work with Megan, Tess, and our Female Prep players heading into a next season,” said Coaching Consultant, Dwayne Gylywoychuk.

As the excitement for the year ahead builds, RINK is excited to have Megan on board going forward.