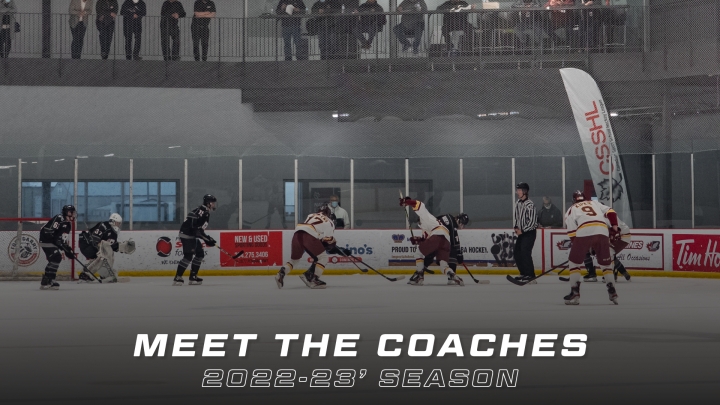 Season Outlook: Our coaching staff are looking forward to working with a new crop of RHA Student-Athletes this upcoming season. There will be lots of ups and of course some downs, but the important thing for us as coaches is that we are getting better each time we hit the ice or the gym. I think we have a nice mix of size, speed, and grit.  It will certainly be an eye opener for all of the players of just how good some of the teams and players are at this level and in the league.  We will certainly be competitive and challenge the other teams in our league and I look forward to watching these student-athletes grow and mature over the next 6 months.

Highlights to look forward to: Playing our first home game this upcoming weekend will be a highlight for me as a coach and our student-athletes. Our first league weekend in Calgary will also be something our team can look forward to. We will be playing the top 3 teams from BC and we will be tested right away which is exactly what we want at this time as it creates a good bench mark for our student-athletes heading into the year. The two tournaments we plan to play in will also be an exciting opportunity for our student-athletes to showcase themselves against the other top teams and players at this age level.

One word to summarize the message going into the year: Compete

After a 15-year playing career, including the IHL, ECHL and Europe, as well as representing Team Canada on three different occasions, Brad retired and joined the University of Manitoba Men’s Hockey coaching staff. Following this Brad joined the RINK Hockey Academy in their inaugural year and has served as Head Coach of U-15 Prep for the last 5 years. Brad has a High Performance 1 coaching certificate and has worked with Hockey Manitoba and the Program of Excellence U16 on three separate occasions, most recently as the head coach of the 2015 team that took part 2015 Western Canada Bantam Challenge, capturing the silver medal. Brad was also a part of the coaching staff that won Bronze at the 2015 Canada Winter Games.

This Manitoba born and raised native comes from a deep hockey background, which includes 5 years in the WHL with NHL camp invites to Tampa Bay and Columbus. At 21 he committed to playing at the University of Manitoba with the Bison for 5 seasons. Following his university career, he played in the ECHL with the Wichita Thunder for one season where injuries cut his playing career short. This is when he transitioned into player development with our staff at The Rink Training Centre since 2016. For the inaugural year of our RHA program Ian had the opportunity to be an assistant coach with our Midget team. He is extremely excited to continue to build from last season and to provide experience and growth for our players as well as our program.

Season Outlook: RHA U16 Prep is really excited to have a large number of returning players as well as a new crew of talent coming in. We will have a great mix of speed, skill and grit. Learning the details of the game, defending hard and allowing a lot of creativity will be our mission for these players as they take their game to the next level. We start right away with exhibition games vs Thunder Bay that are typically a heavy style of play. It will be a great test to see our starting point as we build for the season.

Highlights to look forward to: Our U16 Prep team has a couple trips to the states which will open some eyes to other avenues for our student-athletes. It will allow them to experience hockey in the United States as well as get to watch some great hockey and tour some first class facilities.
With the league moving to more showcases, it will provide more opportunities for players to see other teams from around the league while the same time getting noticed by WHL and Junior teams in those representing areas.

One word to summarize the message going into the year: Opportunity

Season Outlook: Our team is built a bit differently this year at U18 Prep. This will be the oldest team we have iced in the history of the RHA Winnipeg program. At RHA U18 Prep, we have seven 17 year olds which should be a big impact for our team in terms of experience and leadership. Surrounding these older player is an exciting group of 15 & 16 year old players. Our team will have a nice mix of size and skill and should be very hard to play against.

Highlights to look forward to: Highlights to look forward to: CSSHL playoffs is always the best time of the year and what we work so hard for all year long. Other than that we have a number of trips to look forward to in Fargo and Alexandria. Due to COVID-19 and our ability to travel to the US was hindered in the past few years and we will be playing in a US showcase as well. Our team will get to attend a UND Div. 1 game as well as a Fargo Force USHL game during this trip. The student-athletes will also get to play at the Ralph Englestad arena this September which is one of the more iconic buildings in the hockey world and experience they will soon not forget.

One word to summarize the message going into the year: United – We are nothing without each other or we are everything because of each other.

Born in Steinbach, Rob started his hockey career playing for the Steinbach Millers and Eastman Selects.  At age 18 he moved to Calgary and spent three years playing Major Junior Hockey for the Calgary Hitmen and Brampton Battalion. From there, Rob played four full seasons with the University of Manitoba Bison’s while he finished a BA majoring in Psychology. His final two years with the Bison’s he was named Captain of the team. After his university career he played professional hockey in Germany and in North America. Shifting his focus from playing to coaching before Rob started behind the bench he was certified as a Strength and Conditioning Coach where he worked with athletes from many different sports. The love of being a mentor and hockey coach moved Rob to start coaching hockey in the Winnipeg AAA system. After one year he joined the Steinbach Pistons of the MJHL as an Assistant Coach and won the Turnbull Cup in 2013.  Rob has also been heavily involved with the U-16 POE Manitoba program coaching in the program for 4 years both as a Head and an Assistant Coach.

Season Outlook: Create an environment that fosters players to build positive working relationships. Compete every shift, relentless in our work ethic and detailed in our execution of team tactics.

Highlights to look forward to: Empowering young women in their pursuit of excellence both on and off the ice. Cultivating a culture that is built on Trust, Value, and Respect. Enjoying the process and building life skills that go well beyond sport.

One word to summarize the message going into the year: Compete

Megan brings an extensive coaching resume to the table with over 10 years’ experience coaching elite athletes in BC, Alberta, and Ontario. She has a number of year experience as well working within the Canadian Sport School Hockey League (CSSHL) and most recently was the Head Coach for the Ontario Hockey Academy U18 Female Prep team. Being a former NCAA Div. 1 and USport Canada West athletes, she understands what it takes to be successful to continue progressing within the game and beyond. Quoted as being a “student of the game” and continuous looking to challenge herself has had its benefits. Megan also possesses a master’s degree in coaching studies from the University of Victoria.