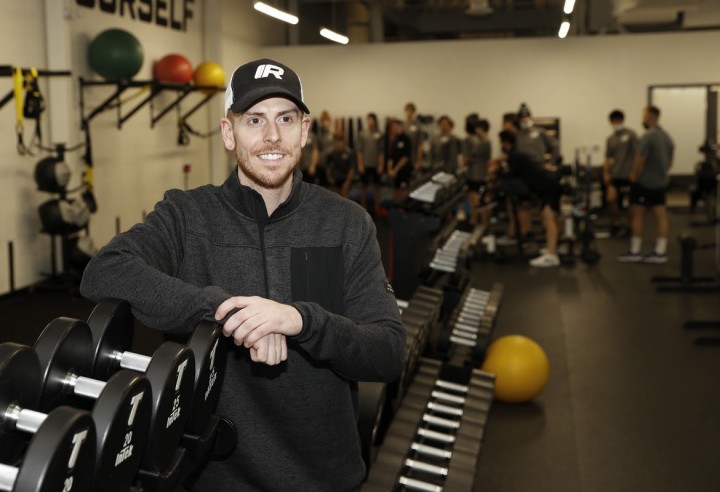 Brad Purdie, the head coach of the RINK’s U15 Prep team goes back a long way with his assistant coach, Ian Duval.

Not only has Duval been a member of the coaching staff at the RINK since 2016, he also learned the game from his current boss.

“Yeah, I’ve known Brad for a long time,” said Duval with a laugh. “He actually coached me when I played for the (University of Manitoba) Bisons. He was our assistant coach at U of M, so now I get to work with him. Things often come full circle.”

Born and raised in St. James, Duval started playing hockey at age five. He played all his minor hockey in St. James and then made the AAA Hawks.

“When I first got to the U18 level, I was 15 and got cut by the Thrashers so I went and played a year with the Central Plains Capitals,” he recalled. “That year, I got chosen (in the seventh round, 131st overall) by Regina in the Western Hockey League Draft, so from 16-20, I played in the Western Hockey League. After that, I went to the University of Manitoba for five years, then played half a season in the East Coast League, but got pretty seriously injured. I tore the labrum in my left shoulder a couple of times. Then second time I was 28 and the recovery was about eight months and I decided to pull the plug.

At the end of 2015, Duval left the ECHL and while he was deciding if he was going to play again, he ran into an old pal named Mike Hellyer at a Bison function. Hellyer runs Testify Performance at the RINK and Mike asked Ian what he was going to do.

“Soon thereafter, I got into player development at the RINK on the skill side,” Duval explained. “I was pretty fortunate because that was the RINK’s inaugural year for RHA, so I applied for the assistant coach’s position and I got a meeting with U18 coach Rob Smith.

“We had a great meeting and I ended up getting the position and I worked with Rob for five seasons and then switched this year to work with Brad. I was pretty fortunate to come in at the right time. I enjoy coaching. I still love doing the skills side of it, but coaching a team is my passion.”

Duval admitted that he’s like a lot of players. He really didn’t understand the right way to play the game until later in his career. But when he did, it set him up to be a better coach.

“My last couple of years with the Bisons, I started to figure it out,” he said. “I finished my career strong and obviously I wish it hadn’t ended with injuries. I got better into my 20s and was having a good year at Wichita when I got hurt. My goal was always to play pro hockey and at least I got a taste of it. I’m grateful that I got experience getting paid to play the game that I love. I really enjoyed that. It was fun.

“I’d love to be a head coach one day,” he admitted. “However, saying that, it’s not like I’m taking a back seat to Brad. He allows me to have a voice, give my opinion and help guys out. It’s nice learning from Brad and I learned a lot from Rob in the five years I was with him.”

Purdie is thrilled to have Duval beside him on the bench this season.

“Ian brings a wealth of knowledge, especially in the offensive zone and on the power play,” Purdie said. “He’s very passionate about making players better, but at the same time holding them accountable to make sure they are doing things the right way.”