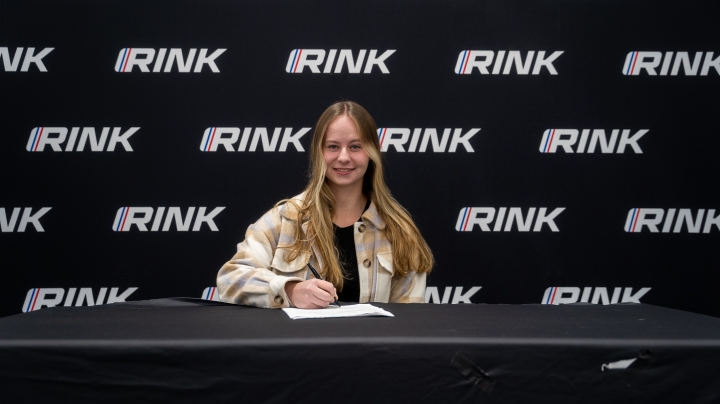 When you bring up the words like consistency, talent, work ethic, drive, and focus people around RHA Winnipeg tend to bring up Glory Plett. Glory is what you would consider an “OG” or “Day 1” of the RINK’s Female U18 Prep team. She joined RHA for the inaugural season in 2019-2020 and never looked back.

Coach Tess Dusik had high praise when asked about Glory's time with the academy. "Glory is a straight up work horse. She the type of athlete who puts her nose to the ground, gets her work done and then some. Glory reminds me a lot of Josh Morrissey of the Winnipeg Jets. She is a top end puck mover, plays big minutes in both penalty kill and powerplay teams, has a defense first mind-set but is such an offensive threat when she jumps up into the play.  She's capable of making highlight reel plays and does a phenomenal job of getting her shots through from the point.  All of which ultimately landed her a spot on the University of Manitoba Bison's roster.  As one of our most successful defensemen, her consistency and compete level is what Glory will be able to contribute to the Bison's play and have a successful college career."

Glory continued to improve and persevere through some incredibly tough years during COVID and locked down a career season in the 2021-22 season notching just under a point per game with 7 goals and 17 assists for 24 points in 25 league games.

"The 3 years I played at RHA Winnipeg were some of the best times I've had in hockey. The level of coaching I received was second to none. Coach Mags & Tess really helped grow my confience with the puck and emphasised the importance of grit within my game to be successful. With travelling so much, I was able to make a great group of friends and got to share so many new experiences with and see so many new places."

The saying goes, “One person’s misfortune, is another person’s opportunity.,” and that is exactly what happened this year for Glory and the University of Manitoba Bisons Female Hockey Team. This year, Glory was listed as an Alternate Player (AP) with RHA Winnipeg which allows her to play up to 10 CSSHL League games while attending classes at Shaftesbury that count towards her degree. Unfortunately, there was an injury on the team that opened a spot. A spot that Glory was happy to step in and fill.

When asked about seeing Glory succeed in hockey and school Coach Tess Dusik has the following to say. "Glory is one of RHA's graduating players that I am most proud of to have coached. To see how far she's come in not only the RINK's programs but how far she's developed as a person. I remember meeting Glory for the first time when she was in grade 9 and a part of our R1 program.  Glory was as shy as they come but had this special quality about her. She never stopped working. She is a person you can rely on in game play to always be ready to go - she's one of the first people to show up to any hockey related event and will be one of the last to leave. Her compete level with how genuine and down to earth she is, is one of the best examples we have for what an RHA student-athlete should be. Her effort level has helped her confidence grow into the player she is today. Not only is Glory a great example as to what I want our current and future players to behold as an athlete, her academics are the same. One of my college coaches once told me that an elite athlete competes just as hard as they do on the ice as they do in the classroom. And this holds very true for Glory - she was on the CSSHL All-Academic Team for 2021-2022 and was an honours with distinction student all her years at Shaftesbury. Glory is currently studying engineering at the University of Manitoba and not only is that an extremely hard program to study, but she's also doing that while playing hockey at the highest level in Canada.  As we used to say around the rink, "If anybody can do it, it's Glory."

On November 8th, 2022 Glory signed her player commitment letter with the University of Manitoba Bisons Female Hockey team. So far, she has suited up in 4 games in which she has yet to register a point.

"I was really honoured and excited for the opportunity," Glory said when asked about the opportunity to sign with the Bisons. "The speed of the game and pace at which girls can make plays is the major difference I've found from U18 to USports hockey. It's been a good transisition though as I've been practing with the team as well over the past few monhts."