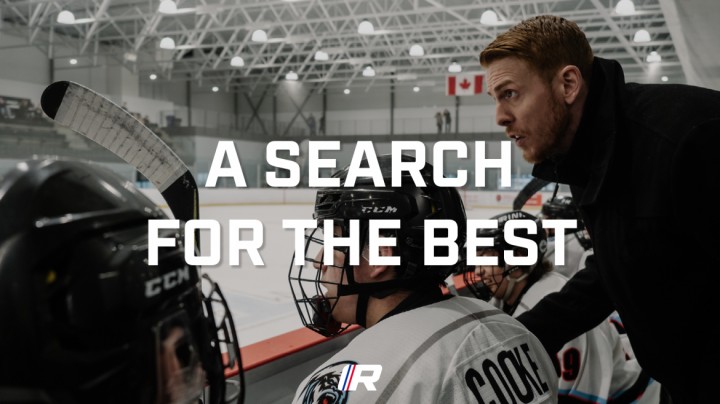 Search For The Best: A Look Into Recruiting for RHA

Owen Pickering had just completed his 2021-22 Western Hockey League season with the Swift Current Broncos and had even spent a few weeks with Hockey Canada's national U18 team, when he was seen walking out of the RINK.

"It's the way I'll spend the summer," he said. “Working out here at the RINK and getting ready for Swift Current next season."

Pickering's presence at the RINK is not a surprise. Fact is, many players who have graduated from the RINK Hockey Academy still return to skate, work out at Testify Performance and hang out with the coaches who made them the successful players they are today.

And the man who is generally responsible for getting all these solid young players to come to the RHA program is a former player and coach from Grand Forks, N.D., named Nick Fuher.

Fuher is officially the RINK's director of player personnel and it's a job he loves.

"It's been six years in the making," said Fuher, referring to the fact the RINK will be heading into its seventh year of operation in 2022-23.

"It's exciting and the success starts right from the beginning of the program. Young players now see a precedent that we've tried to set as a staff when it comes to expectations, but the work ethic that the players came in with set the stage for what the program is about today. To see those guys come back to train year after year in the off-season, that's what really excites us."

Pickering is just one of many star players who return to the RINK to train. On any given summer's day, you'll find Carolina Hurricanes young gun Seth Jarvis, Winnipeg ICE star Carson Lambos or the No. 1-ranked goaltender in North America, Tyler Brennan, who is a top prospect in the 2022 NHL Draft, all working out at Testify Performance. Fuher has been responsible for not only recruiting some of the finest players in the game today, but also players who return to the RINK in the off-season because they've fallen in love with the place.

"Recruiting players to come to any Prep program is something that requires a commitment on all sides," Fuher explained. “There is logistics involved and there is the level of a young player's skill set. There has to be a work ethic involved, players who are committed to working hard every day because we are working out and we are on the ice here every day. Then, of course, there is the financial aspect at the end of it."

Fuher, who has been with the RINK right from the beginning, tries to be as clear as he can possibly be with any family interested in sending their sons or daughters to one of the strongest, most complete Prep hockey programs in the country

"We just want to be able to outline what we can provide to the players and their families," he explained.

Fuher arrived at the RINK from the Penticton Vees of the BCHL. As the team's assistant coach, he had just won two league regular season championships, a league playoff and a Western Canadian championship. He talked with Jon Cara to get an idea of what the group in Winnipeg was trying to achieve.

"It's been exciting to be part of something in the early stages," said Fuher, who is now in an arena scouting and recruiting "at least four or five nights a week."

"I came on board as the assistant coach of the U15s and then, the following year, moved up to the U16s as head coach," he added. "By my fourth year, I was working with (former U16 head coach) Sandy Henry on the recruiting side. I think the challenges of recruiting as a head coach, especially when you're away with your team as often as the coaches are here, is very difficult. In the early years, we were able to do it and still grow the program but as the years went by, it became clear that we needed someone to be on top of recruiting all the time. That's when it came about to have that as a full-time opportunity."

Fuher grew up playing hockey in Grand Forks and "first became connected" with hockey in Manitoba in 1998 when he decided to play with the Winkler Flyers. Following that, he went on to play with the Lincoln Stars in the USHL, then spent four years at the University of North Dakota, in his hometown, where he helped them advance to the national championship game in his final year. After a career-ending injury in just his third game with the Utah Grizzlies of the AHL, he turned to coaching.

He then coached in Lincoln, moved to high school hockey at Grand Forks Central, in the MJHL at Winkler and then off to Penticton for two seasons, before returning to Winnipeg and a spot at the RINK.

"My experience in all these leagues has provided me with a lot of tools and connections to help me do what I do today," he said. "On my checklist, I'm probably very similar to many coaches and scouts. Skating ability is the first thing I look for. At this level, you just have to have it. If you can't keep up with the play, you're going to struggle. Then it's character. What's your compete level? At the end, what's special about a player that separates them a bit more than the rest - shot, great hands, strength, courage? That's an important starting point.

"That's what we look for. We feel our goal is to help develop and produce better Manitoba players."