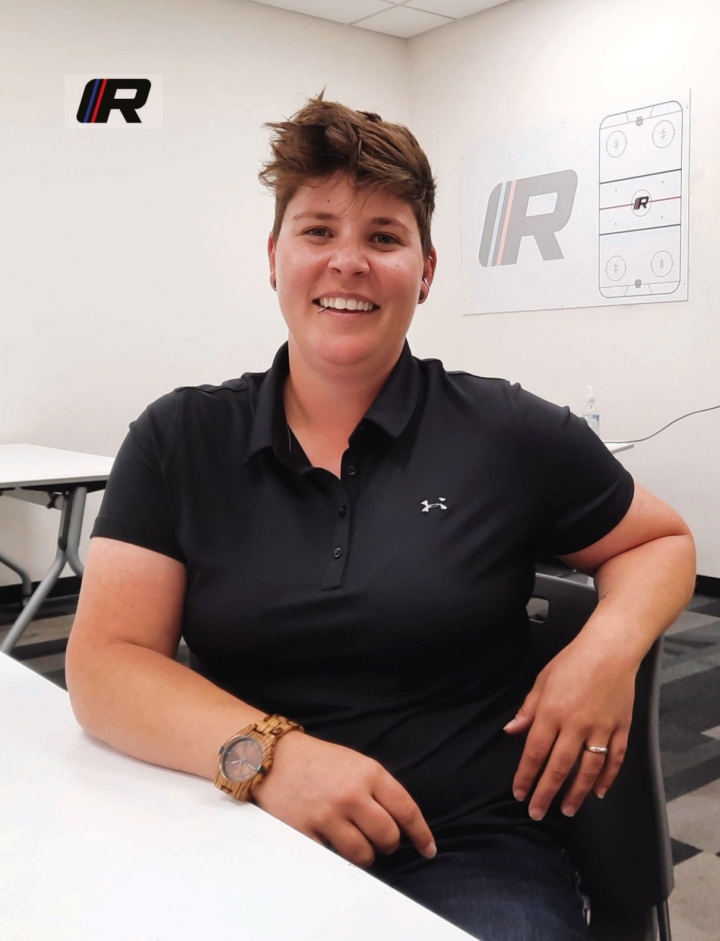 Affable and fun, with a 500-watt smile, Megan Price exudes the confidence you'd want in a coach. But a more valuable thing she offers is far less obvious. When it comes to training. preparing and playing the game, the secret sauce is mental toughness.

Price was hired in July as head coach of the RINK Hockey Academy's Female U18 Prep team for the 2022- 23 season. In addition to strong coaching and education credentials, Price offers an extensive research background in mental toughness. Her ability to teach players to deal with adversity may well be one of her greatest assets as a coach. "It's understanding your development is something you're accountable for and the mental side of the game, I would say, is 80 per cent of the game. You can have two players that have the same skill, or even a player who's maybe a little bit more talented on the ice, but if they don't have the mental performance to be able to overcome obstacles and challenges, to refocus, recentre themselves, that's where they're going to lose out."

Price, 34, has trained elite athletes in Alberta, British Columbia and Ontario for a decade and is a former NCAA Div. 1 and USPORT (Canada West) athlete with high-performance coaching accreditation. "First, I focus on the players because the results will eventually come. You have to focus on building those relationships and understand that developing hockey players is not just on the ice. It's so much more about the life skills they will take with them moving forward." She says young RINK athletes cope with a gruelling game schedule, lengthy road trips and academic demands and all that can take a toll. "As coaches, we get so consumed with the season; things come up on a pretty regular basis, and the mental performance side sometimes gets put aside," Price says. For her master's degree in education at the University of Victoria, Price focused on developing mental toughness in women, ages 15 to 19, and designed a resource tool for coaches.

She identified four pillars: challenge, control, commitment and confidence, outlining techniques such as visualization.With these skills, Price believes the RHA U18 Prep women will not only be top contenders in the Canadian Sport School Hockey League (CSSHL) this season, but will begin to play at the national level. "That's my goal. My dream is to develop this program into the most excellent program that you can have in Canada. I want people to be lining up to come in the door," she says. Price coached the Ontario Hockey Academy U18 Female Prep team in Cornwall, ON and was head coach of the Victoria Admirals U15 AAA. She coached for the RINK's rival hockey program - Edge School for Athletes in Calgary. Born and raised in Calgary, Price played every sport from wrestling to rugby. Her sister, Jenna, was a figure skater, but Price started hockey at age seven after watching her brother Jason's games. She says her parents, Joe and Denise - both from Newfoundland - were behind her all the way.

She coached for Hockey Calgary's FMAA, the FMAAA Northern Capitals in Prince Albert, B.C. and at B.C's Shawnigan Lake School (CSSHL). Price went with Team British Columbia to the 2022 National Aboriginal Hockey Championship (NAHC). They brought home bronze. Price, who is not Indigenous, says it was one of her greatest coaching honours. Price went to Niagara University in New York on a NCAA Division 1 scholarship and studied business administration and management. Back in Alberta, she went to Mount Royal University as a Canada West Athlete and played defence for their USports team. She earned a bachelor's degree in sport and fitness administration/management.

Both Price and her wife, Tiana, worked with high- risk youth in group homes. The move from Victoria to Winnipeg was substantial for Price because the couple made the decision that Tiana, who has a psychology degree, would stay behind - at least temporarily, as will golden husky, Molly; Australian shepherd, Dax; and Edith, the grey tabby cat. "For us to be able to do this, we always say to each other, "You have to give something up to get something." Price said. "So this is a massive step in my career."Price says she's very excited and grateful to be in Winnipeg, although she's asking Santa to send heated vests, socks and longjohns to cope with winter. (Come on, you two. You're from Calgary and Prince George!) "This RINK academy is second to none, and I've been at four of them already," she said. "You see the professionals they produce, but also the people involved in this program; down to earth, very easy to get along with, and they build those relationships with one another. And that trickles down to our teams."